As the years fade Sergio Ramos becomes increasingly important to both Spain and Real Madrid.

The 34-year-old from Seville is the most-capped Spanish player of all time with 178 appearances, 11 more than fellow Real Madrid legend Iker Casillas.

He is also the ninth top goal scorer for the national side having chipped in with 23 goals.

With his club Real Madrid, it is a similar story.

The central defender, who started his career as a right-back at boyhood club Sevilla, is fourth on the list of most appearances and has scored more than 100 times.

This season, though, the Spanish giants have struggled in his absence.

Indeed, Ramos has only played in 14 out of 22 La Liga games and half of the club’s six games at the Champions’ League group stage.

And it has shown just how important he is to the club.

Looking at his goalscoring contributions, his leadership qualities, Real Madrid’s results with and without him and his overall time at the club, I will assess just where Sergio Ramos ranks out of all-time Real Madrid players?

Sergio Ramos is currently recovering from knee surgery, having undergone a recent operation, meaning he is out for at least six weeks at a critical time of the season as the Champions League returns next week.

There are also crunch matches in LaLiga that Los Blancos must win to have any chance of catching Atlético Madrid.

Even if Diego Simeone’s side are champions, finishing above Barcelona is imperative for Zinedine Zidane’s men, alongside a better showing in the Champions League knock-out stages than last year.

Concern is also mounting about the player’s contract situation. According to Diario AS, Ramos and the club are currently at odds over any renewal of the contract which expires this summer.

Manchester United and PSG are rumoured to be two of his possible destinations.

It is true that both Rául and Iker Casillas left the club towards the end of their careers and nobody is suggesting that Ramos’ overall record at the club will be tainted if he were to leave this summer.

But the fact is the fans and the club would hate for him to leave the Spanish capital on a free.

And if concerns are being raised about Ramos, it is because he is one of, if not the most, important player in this current squad.

His goalscoring contributions for the club

Whilst Ramos is first and foremost a centre-half, his goalscoring record speaks for itself.

This is especially true in recent seasons. 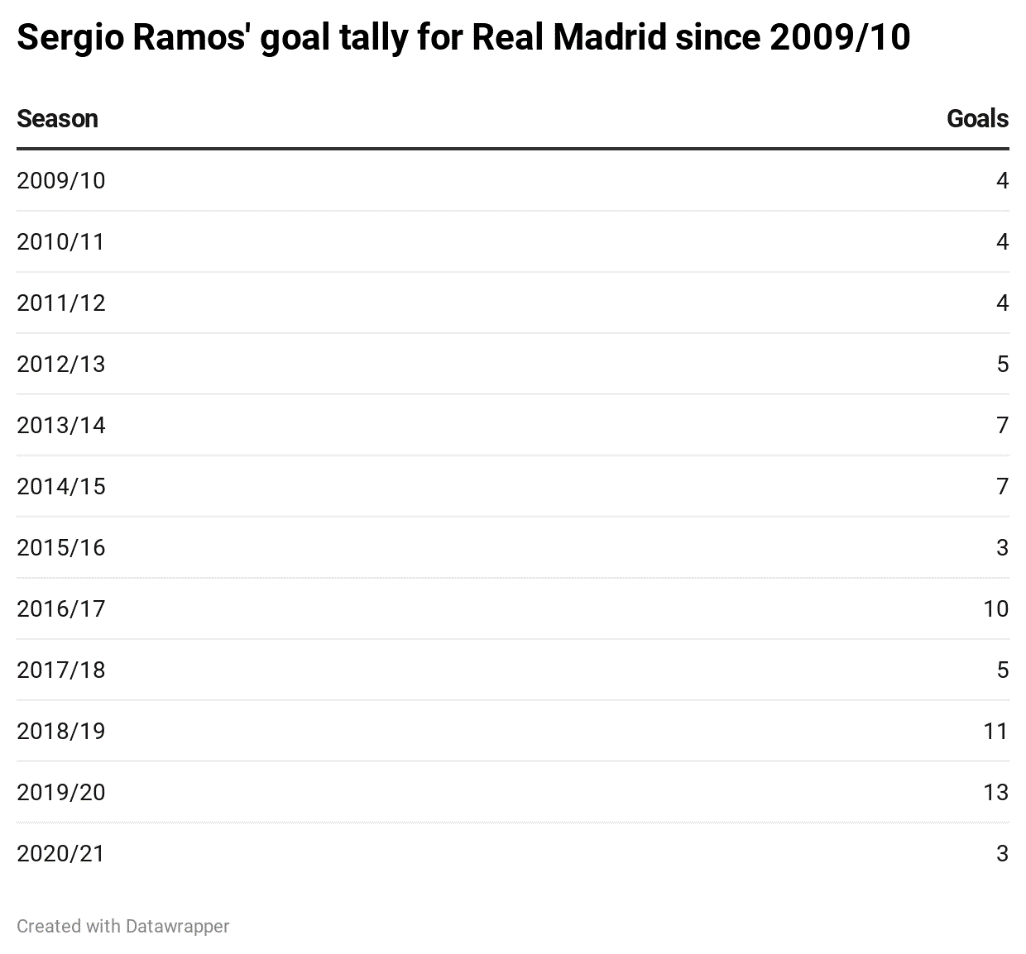 In three of the last five campaigns, he has hit double figures, mainly via the penalty spot or his heading ability from corners.

But Ramos does not just score goals; he has a knack of scoring important ones.

His equaliser in the 93rd minute against Atlético Madrid is the most obvious example of this, but it is not the only one.

In fact, to get to the final, Real Madrid faced a tough draw against Bayern Munich in the semi-finals.

Going into the return leg match with a 1-0 aggregate lead, Ramos scored twice within the opening 20 minutes to put daylight between the two opponents.

Ramos also opened the scoring in the subsequent final in 2016 between the two Madrid-based sides.

In this season’s El Clásico, Ramos put Madrid 2-1 up from the penalty spot as they would win 3-1 at an empty Camp Nou.

Last season, during the lockdown period, Ramos scored six goals in the final 10 matches in order to bring the title back to the Santiago Bernabéu.

And these regular and important contributions are even more vital since this is a team which, since Cristiano Ronaldo, has struggled to find regular goal scorers.

Eden Hazard has struggled, and the less said about James Rodríguez and Gareth Bale during the 2019/20 campaign the better.

Last season, Benzema and Ramos, with 25 and 11 respectively, were the only players to reach double figures in LaLiga.

Despite his goalscoring brilliance, Ramos is first and foremost a defender and the captain.

It would indeed be hard to imagine a side without him.

Whilst Madridistas thought the same about Casillas and Raúl, this time feels different.

Real Madrid have really struggled this season and, over the last couple of years, Ramos is one of the few areas of stability alongside Karim Benzema.

He is the ultimate Real Madrid defender; tough, boisterous and determined.

He plays from the back, lunges into tackles, is good in the air and starts attacks from defensive positions.

He is not afraid to speak his mind on the pitch. He is serious but also seriously funny.

Having been club captain since 2015, he knows the club inside out.

You cannot underestimate how much he would be missed.

As previously noted, Real Madrid struggle without Ramos at the back.

You only have to look at the statistics to understand this.

In Real Madrid’s last nine Champions League matches without him, they have lost seven.

Whilst the statistics in the league are not quite as dramatic, in the eight domestic games without him, the club have lost twice (against Levante and Alavés) and drawn another.

Ramos did, however, play in Real Madrid’s two other defeats (1-0 at home against newly promoted Cádiz and a 4-1 thumping at Mestalla against Valencia), which only suggests that the club’s struggles go way deeper than whether Ramos is in the starting XI.

Having said this, because of his leadership, knack for scoring important goals and his world-class defensive ability, Real Madrid are far better with him than without.

You only have to look at Liverpool during Virgil Van Dijk’s absence to make sense of this.

Overall time at the club

Although Ramos has become increasingly important in this Real Madrid side, any piece about him should acknowledge his overall record at the club since signing in 2005 from Sevilla.

But it’s his record in European football which is most impressive, having starred in Real Madrid’s four Champions League victories in five seasons.

And this is made all the sweeter when you consider what he went through with his missed penalty in the shoot-out in the semi-finals against Bayern Munich in 2012.

Finally, he has played a dominant role in the Spanish national side.

And this is not just because he has scored 23 goals and achieved 178 caps.

Indeed, what he will be remembered most, apart from breaking these statistical records, is that he was also a fundamental part of Spain’s golden generation which won the European Championships in 2008 and 2012 and the World Cup in 2010.

He and Cesc Fàbregas are the only players who started the 2008 Euro final who are still playing.

He is one of four, alongside Iker Casillas, Xavi and Iniesta, who started in all three finals.

And if Spain are to have success during this summer’s European Championships, La Roja will be relying on his services once again.

Fernando Hierro, Alfredo Di Stéfano, Zinedine Zidane, Cristiano Ronaldo, Paco Gento, Ferenc Puskás and Ronaldo Nazário are among some of the greatest of all time to have played for Madrid.

Sergio Ramos belongs in their company for everything he has achieved at the club.

Ramos has played a vital role for both Real Madrid and Spain for many years.

He has scored goals aplenty and played many matches.

He has been a part of Spain’s golden generation and Real Madrid’s Champions League run.

As such, he ranks as one of the greatest players to have ever represented the club and national side.

He should be talked about in the same terms as Iker Casillas and Raúl.

What happens this summer, nobody quite knows yet.

But whether he stays or goes, he will be remembered as one of the club’s best (and most important) defenders, leaders and even goal scorers.

That will be his legacy.