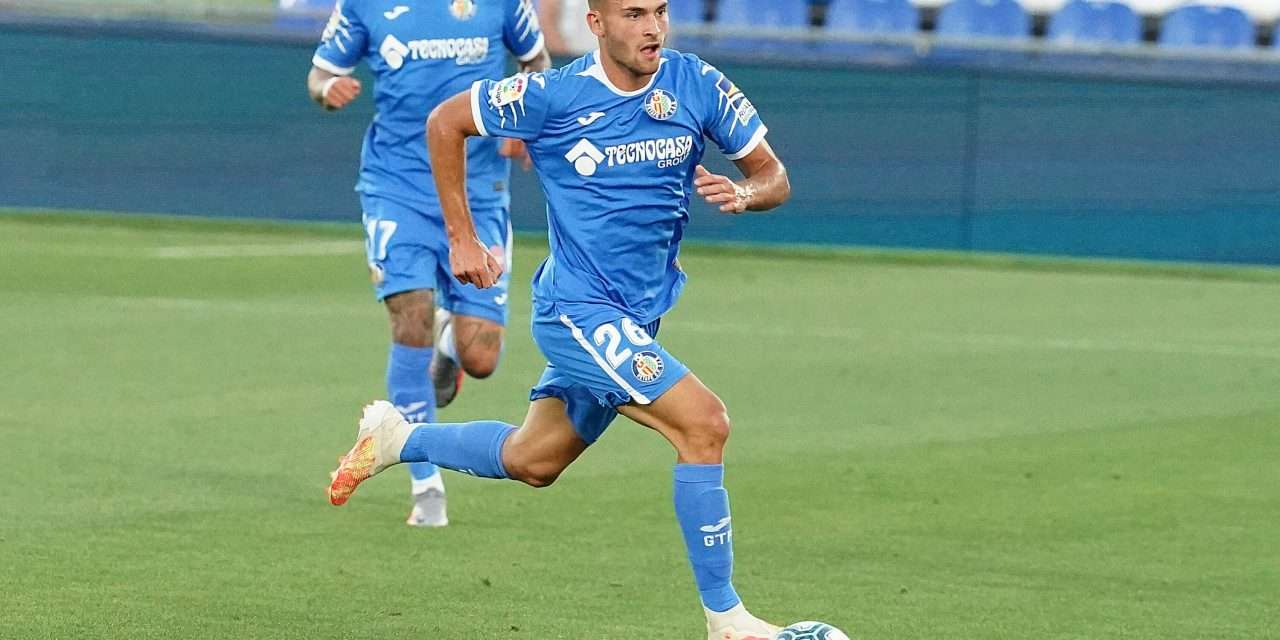 Hugo Duro signed for Real Madrid on an initial one-year loan deal from Getafe this summer. A surprise move perhaps – a player leaving a first team LaLiga squad to join Madrid’s B team, Real Madrid Castilla. However, despite the move being questioned by many, the young striker will have been overjoyed when he saw his name on Zinedine Zidane’s squad for the upcoming Champions League group stages.

Los Blancos will face Inter, Borussia Mönchengladbach and Shakhtar Donetsk in this year’s competition, as they look to win their 14th Champions League in the club’s history.

Duro was born in the south Madrid city of Getafe, a mechanical engineering student in Madrid’s Universidad Carlos III. Snapped up from Getafe on initial season-long loan, Madrid have been watching the young forward for a couple of seasons. “We’ve been keeping a close eye on him since he was at under-17s level,” a club figure told AS when asked about the 20-year-old.

José Ángel Sánchez, general manager of Real Madrid, phoned Getafe president Ángel Torres to close his loan deal with an option to buy in 2021 for €3 million. It has since been reported that Getafe head coach José Bordalás was not very happy about the deal. Bordalás handed Duro his first-team debut in a Copa del Rey game on October 24, 2017 against Alavés. A teenager at the time, he was learning his trade in the club’s youth team.

Until this summer, Duro had spent the entirety of his career at hometown outfit and fellow LaLiga side Getafe. Getafe have deployed him as a striker in their own B team setup and as a squad member in Bordalás’ first team for the last three seasons.

Club captain at the time, Jorge Molina, as well as fellow strikers Jaime Mata and Ángel Rodríguez have helped Duro’s development as he broke into the Bordalás’ gritty Getafe side, making his league debut in March 2018 against Real Sociedad. Impressive first-team performances led to a new contract, which runs at the Coliseum Alfonso Pérez until 2022.

Spain also came knocking recently, recognising the clear potential and calling him up for an Under-21 debut in September against Macedonia. Duro kept his nerve in Macedonia to score a debut penalty that took La Rojita one step closer to the 2021 European Under-21 Championships in Hungary and Slovenia.

Duro heads to Castilla with 25 LaLiga appearances under his belt, along with two Europa League and five Copa del Rey games – vital minutes in a crucial period of development. Madrid have identified the son of an engineer as the man to lead the production line in club legend Raúl’s Castilla side. Studying the art of goalscoring under the tutelage of Raúl is the dream for any up and coming striker.

Due to the impact of the coronavirus pandemic on the transfer market, Los Blancos did not make a single signing this summer for the first time since the 1980/81 season – which has opened the way for youth players to step up. Sergio Arribas and Marvin Park, two members of the Castilla squad, were given their first team debuts away to Real Sociedad in Madrid’s 0-0 draw on the opening day of the season.

Not only is Duro viewed as a highly promising long-term prospect at Madrid, but his move to the club may come at a perfect time when Zidane gives youth a chance as well as the lack of any real backup attacking options for Karim Benzema. Borja Mayoral has joined AS Roma on a two-year loan deal with an option to buy and Serbian striker Luka Jovic is out of favour having had a difficult start to life at the Santiago Bernabéu after a €60 million move from Eintracht Frankfurt in 2019.

A youngster who combines football with a university education, Duro clearly has his head on his shoulders. At 20, his future looks bright, whether it’s at Madrid or Getafe, we can look forward to the young Spain striker for many years to come.